The recent epidemic that broke out in such extreme fashion towards the end of last year (no, not Ebola) but ‘cyber hacking’ is causing colossal problems for rivaling nations such as the United States and North Korea. As tensions reach fever pitch, many people are wondering whether this cyber scandal is going to come to an end or are we on the brink of an international crisis.

Tensions arose involving Sony’s extremely controversial and satirical comedy ‘The Interview’. The film depicts the North Korean leader Kim Jong-Un being assassinated at the hands of two American broadcasters. The film had a proposed release date for late December but the hacking scandal coincidently on the 22nd November, just a month prior to the film’s release. However speculation has since mounted prior to the November attacks with suspicion that North Korea may have had a hand in the attack as a form of retaliation for Sony’s release of The Interview. North Korea’s foreign ministry spokesman called the movie an “act of terrorism” in June, promising “merciless” retaliation if it was released. 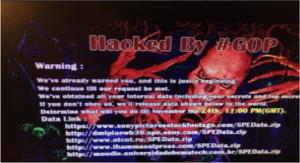 Signs that Sony’s computer system had been compromised began when skulls appeared on employees’ screens with a message threatening to expose “secrets” from data obtained in a sophisticated hack. An unknown group who later identified themselves as the ‘Guardians of Peace’ claimed they were behind the cyber attack. This swiftly prompted the FBI to launch an investigation into the matter, with their name later being attached to the subsequent leaks of private and confidential information, including an early version of the next James Bond movie, five other Sony films, including an unreleased version of Annie and Brad Pitt’s Fury which resulted in a million downloads of the movie which had just hit the big screen. A whole host of Sony’s private company information was exposed to the public, which included bosses’ salaries and employees’ social security information. 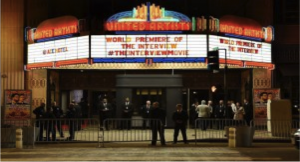 With the ongoing attacks showing no sign of relenting more precious information was leaked including film budgets, employee contracts and personal emails. Sony was forced to scrap the Christmas day release as the cyber terrorists threatened to “blow up the theatres that choose to show the film”. Releasing the following statement: “In light of the decision by the majority of our exhibitors not to show the film The Interview, we have decided not to move forward with the planned December 25 theatrical release,” Sony also said in a statement. “We respect and understand our partners’ decision and, of course, completely share their paramount interest in the safety of employees and theatre-goers. Sony Pictures has been the victim of an unprecedented criminal assault against our employees, our customers, and our business. Those who attacked us stole our intellectual property, private emails, and sensitive and proprietary material, and sought to destroy our spirit and our morale – all apparently to thwart the release of a movie they did not like. We are deeply saddened at this brazen effort to suppress the distribution of a movie, and in the process do damage to our company, our employees, and the American public. We stand by our filmmakers and their right to free expression and are extremely disappointed by this outcome.”

White House press Secretary Josh Earnest told reporters that the Sony cyber attack’s needed a tempered response: “I can tell you that, consistent with the president’s previous statements about how we will protect against, monitor and respond to cyber incidents, this is something that’s being treated as a serious national security issue.” The hackers then contacted Sony on 19th December ensuring them that it was a “very wise decision”, implying that as long as the movie stayed out of the movies and theatres the attacks would end, otherwise the threats would continue.