We are discussing if Citymapper is London’s best travel App…

After using various travel apps in London, Citymapper has been a clear stand out performer. I have been an avid Citymapper user ever since I made the life changing move to the iPhone a couple months ago. I must say, being new to London, Citymapper has been my ‘go to app’ when trying to navigate my way around – the only problem being, when the decidedly ropey iPhone battery decides to call it a day and I’m left to my own devices, Citymapper’s no longer there to bail me out! The app has impressed me in many ways with its smooth functionality and detailed thought through travel instructions combining to create a top-class user experience that can be enjoyed on the all-conquering iPhone devices.

Upon entering the app you are greeted with a very simple but slick green interface which cleverly draws your focus into the all important ‘get me somewhere’ icon. Having found yourself in unfamiliar territory and needing to find a quick/cost efficient way of getting home, at a click of a button, the app will produce a number of transport options including walk, bus, bike, tube, taxi and even river ferries, along with pretty accurate timings. More so with the various options of travel, you are also given an estimated price of the journey, which is where Citymapper pulls ahead of other travel apps out there such as Google maps. 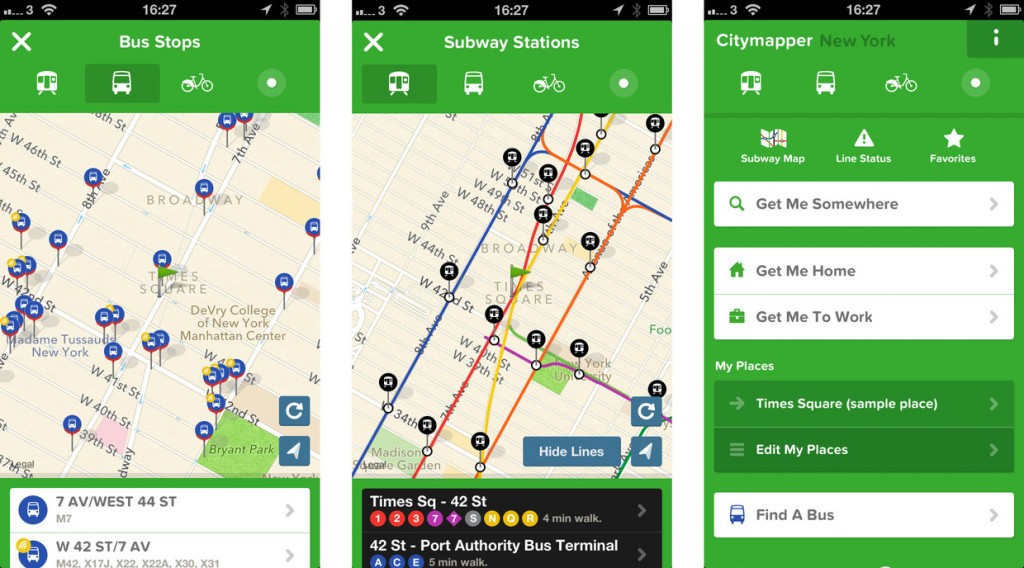 Essentially, this a Google maps on steroids, they have it tied down to a T and with Google’s current ‘buy buy buy’ acquisition mantra, it sure wouldn’t surprise anyone if they, or any other big corporations were having a sniff around. This summer I’m sure any commuters or general London travellers will try at all costs to avoid the sweaty overheated tube carriages. My preferred mode of transport has got to be the bikes in the sun, and having not invested in a bike of my own, these Barclays bikes are getting some great airtime. The Barclays bike stops have now been integrated into Citymapper, providing a perfect alternative to the tube, along with the added bonus of burning off a few calories – a win win all-round!

Back in April Citymapper raised $10 million to continue their rapid progression in taking over the travel app market. Looking to roll out in other cities around the world, Azmat Yusof, CEO and co-founder of Citymapper said “How you get around a city is really core to its culture,” – it looks like in not so long we’ll be able to enjoy the fantastic services of this great app when we head away for a city break.